interactions with other species 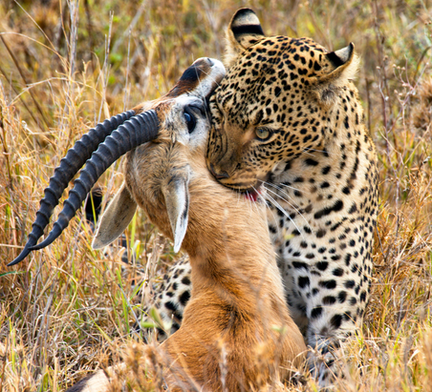 Photo Source: http://africawildlife.org/wp-content/uploads/sites/2/2013/04/shutterstock_100892959.jpg
Jaguars are apex predators and keystone species. Without their interactions, their ecosystem could be at risk. Other than interactions between their own species for mating purposes, these animals have interactions with their prey and with humans (A-Z Animals, 2013). Most of the interactions between jaguars and other species are negative. Either the jaguar kills its prey, or the jaguar itself is hunted, and in each of these situations, only one side of the relationship benefits. Jaguars not only avoid interaction with other species, but their own too. They are territorial animals, and after a cub is born, the father leaves because the mother becomes very protective. Their prey consists of deer, peccaries, capybaras (the largest rodent in the world), and tapirs (Big Cat Rescue, 2014). Jaguars either chase and capture their prey, or climb trees that allow them to swiftly jump down and kill their prey in a powerful bite. Not only do they prey on land animals such as these, they are capable of swimming, and prey on fish, turtles, and caimans (animals similar to alligators).
Video Source: http://www.youtube.com/watch?v=DBNYwxDZ_pA 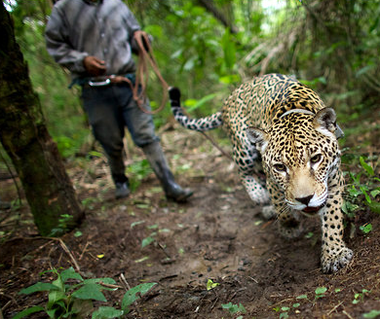 Photo Shoot: http://graphics8.nytimes.com/images/2011/02/03/world/ 03SUB2BOLIVIA/03SUB2BOLIVIA-articleLarge.jpg
Jaguar interactions with the human race include them being hunted and killed because they are either seen as a threat, or killed for their valuable fur. Humans influence the population size of jaguars because they hunt the jaguars, and this leads to a decline in their numbers (Defenders of Wildlife, 2014). This puts the jaguar species at an even greater risk of extinction because the few living jaguars left cannot reproduce faster than they are being killed.
A major threat to jaguars is human hunting. Jaguars are hunted by poachers who value their uniquely spotted fur, and also by humans who simply view jaguars as a threat to their livelihoods. An example is if a jaguar kills and eats a cow, and the farmer kills it without hesitation. Not only does hunting directly decrease the jaguar population by killing them, but by the human hunters that kill the jaguar’s prey (Panthera, 2014). There is an increasing lack of natural prey for the jaguars due to humans overhunting animals such as deer. Since there is a lack of prey in the wild, jaguars are forced to prey on domestic animals, and this only contributes to a vicious cycle of negative human-wildlife interaction. The owners of domestic animals, such the farmer who owns the cow, sees jaguars as a threat and kills them.