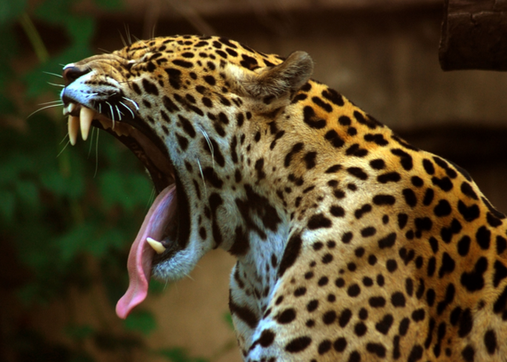 Source: http://en.wikipedia.org/wiki/Jaguar
Jaguars live alone and defend territories of many square miles by marking their surroundings with their waste or clawing trees. Jaguars are unsocial animals that live and hunt alone, except during mating season and first couple of years that Jaguar cubs spend with their mother. The male's territory can range between 19 and 53 square miles and often overlaps with the smaller home ranges of multiple females. Males are particularly territorial and aggressively protect their home range and resident females from other males, which makes the population uniformly distributed. The jaguar is the heaviest cat that can climb and hunts mostly on the ground, but it sometimes climbs a tree and pounces on its prey from above. Unlike most big cats, the jaguar loves the water and it often swims, plays and even hunts for fish in streams and pools ("Jaguar," n.d.).

Density of the population of Jaguars have estimates that ranged from 1.7-4 adults per 100 km² in studies in Brazil, Peru, Colombia and Mexico. Density estimates from five different study sites ranged from 2.4-8.8 adults per 100 km², with the highest found in Belize's Cockscomb Basin Wildlife Reserve. That study found home ranges of females of 10 km², overlapped by male home ranges which varied from 28-40 km² and in other areas jaguar home ranges have been over 1,000 km² (Baillie, n.d.). 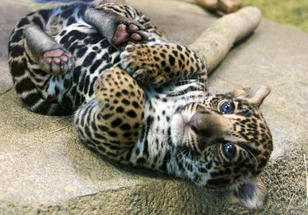 http://awesomew4llpapers.blogspot.ca/2013/03/wallpaper-of-jaguar.html
Females have litters that range from one to four cubs, which are blind and helpless at birth and this lasts about two weeks. The mother stays with them and defends them fiercely from any animal they may come in contact with and will not even tolerate the cub’s father in her territory. Young jaguars learn to hunt by living with their mothers for about one to two years. Jaguars have no specific breeding season and will mate any time of year. During the mating season, the female Jaguar will use loud vocal calls to attract a male into her territory. Jaguars will reach sexual maturity between 2-3 years for females, and 3-4 for males and have a life span of about 12-15 years in the wild (Baskin, Baskin, & Bass, n.d.).

Jaguars were assumed to be nocturnal however recent studies have shown that they are active during the daytime although their high peaks of activity are during dawn and dusk. Jaguars are also more energetic than other great cats, and are active for 50-60% of a 24 hour period. The Jaguar is known to be an extremely aggressive hunter and is thought to eat more than 80 different animals. This allows Jaguars to be top-level carnivores and adapt well due to their large range of prey and their variety of ways to hunt (Baskin, Baskin, & Bass, n.d.).

Deforestation rates are high in America and the destruction of forest habitat isolates jaguar populations. People compete with jaguars for prey, and jaguars are frequently shot on sight, despite legal protection. Jaguars are also known to kill farmers livestock are killed by landowners as pest species. The Jaguar had increasingly become threatened and this was demonstrated by its disappearance by the mid-1900’s from the South-western US and northern Mexico. Although the hunting and trapping of jaguars for their furs have declined drastically since the mid-1970’s, they are still endangered due to the habitat loss and over hunting of furs (Baskin, Baskin, & Bass, n.d.).
Due to the large size and dominance of the Jaguar no other wild animals that are known to actually consider it as prey. Jaguars are powerful beasts that are able to survive off a variety of different prey and can live in many habitats, which allows them to be at the top of the food chain. Although some species are endangered and threatened due to lack of genetic diversity Jaguars are at risk due to the habitat loss and the extreme hunting of its fur. Since Jaguars have disappeared from most of the drier areas of its natural range the lack of genetic diversity has put them at risk but human causes are the major reason. With knowledge it is important to ensure that the protection of Jaguars and their habitat is sustained to prevent the extinction of these beautiful and fierce animals ("Jaguar," n.d.). 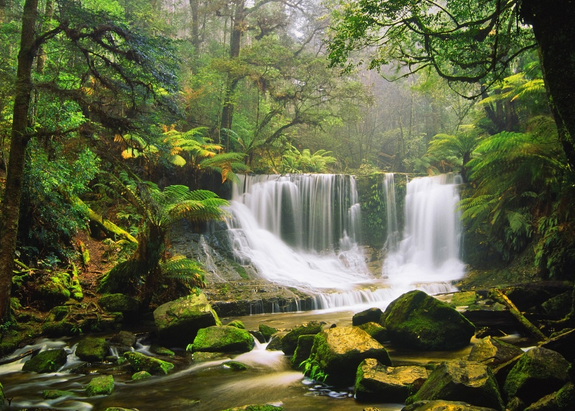 http://wallpaperswide.com/rainforest_waterfall-wallpapers.html
The Jaguar is found in a wide variety of habitats including rain forests, deciduous forests, savannahs, pampas grasslands, mountain scrub areas and swamps (Baskin, Baskin, & Bass, n.d.). The Jaguar is indigenous to the Western Hemisphere, where it mainly occupies the tropical rainforests of Central and South America. Although the range of the Jaguar used stretch across the whole continent and even into the southern states of the USA, they are now limited to remote areas of rainforest particularly in the moist Amazon Basin. Jaguars generally prefer thick, dense, moist jungle where there are plenty of disguises, which can allow them to successfully hunt and ambush prey. They are almost always found near water and prefer wet habitats such as swampland or seasonally flooded forests. The Jaguar has been severely affected by habitat loss throughout much of its natural range and has caused them to become at risk ("Jaguar," n.d.). 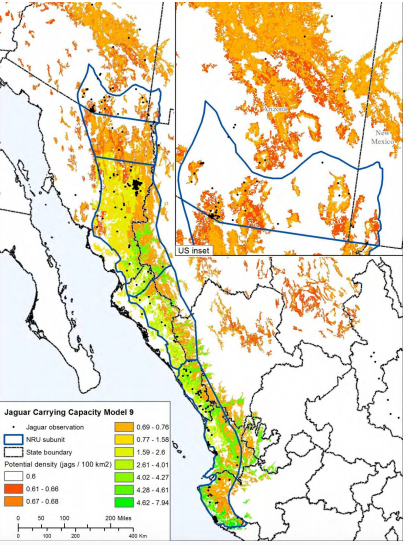 https://www.fws.gov/southwest/es/arizona/Documents/SpeciesDocs/Jaguar/JagHabModelFinalRep2013comp.pdf
The habitat model created was in 2011 with the Jaguar recovery team and they conducted analyses of how different selections of jaguar events influenced the choice of habitat variables, and they produced five revised versions of the habitat (Sanderson, n.d.). For each version, they selected habitat variables, constructed a simple habitat model, and translated that habitat model into potential carrying capacity in northern Mexico and the southwestern United States. The final habitat model produced suggests a potential carrying capacity of more than 3,400 jaguars over an area of over 226,000 square kilometers (Sanderson, n.d.). This capacity can be further broken down into smaller geographic which, from south to north, may have the potential to contain: 1,318 jaguars in the Jalisco Core Area, 929 jaguars in the Sinaloa Secondary Area, 1,124 jaguars in the Sonora Core Area, and 42 jaguars in the Borderlands Secondary Area. However the current populations of Jaguars in these areas are significantly below these carrying capacities, but are not zero according to recent observations in all four regions (Sanderson, n.d.).