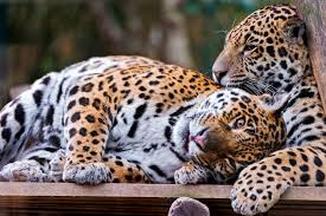 http://galleryhip.com/cute-jaguar.html
During the peak of the jaguar's population decline in the sixties and seventies, around 18,000 jaguars were killed every year for their beautiful coat. Today, the major threat comes from deforestation, which is drastically affecting the jaguar’s selection of prey, as well as dividing the cats population into more isolated pockets. It is estimated that there are now only around 15,000 jaguars left in the wild  ("Jaguar," n.d.).

In Belize, the government, aided by the WWF, have set aside 150 square miles of rain forest in the Cockscomb Basin Wildlife Preserve, which currently provides a protected environment for around 200 jaguars, the largest concentration of the wild cats species in the world. The WWF are also providing aid to protect some of the remaining rain forests areas of South America, which provide a refuge for the majority of the remaining jaguar population ("Jaguar," n.d.).

Another program is the WCS Jaguar Conservation program that began in 1999 to support scientific research that helps us understand what jaguars need and to work with the people who live with jaguars to minimize conflicts. They evaluate key protected areas, and work to improve the status of those refuges where jaguar populations are not secure. In much of their range, jaguars live in close proximity to cattle ranches and other human settlements. WCS works with livestock owners of both large and small herds to communicate ways domestic animals can be managed to improve production and reduce losses to cats (Woods, Grumbach, Heidtke, Samper, & Breheny, n.d.).

The Northern Jaguar Reserve, now at over 55,000 acres, is the result of major binational cooperation to help save jaguars in their northern range. Initiated in 2003, the growing reserve protects key habitat for the last breeding population of northern jaguars which offers hope for their recovery in the United States .
("Jaguar," n.d.).

How can you help?

To help contribute to the programs that are protecting the viability of the jaguars at risk please donate and visit these links below.
DONATE NOW
MORE INFORMATION HERE