EXPLORING THE POPULATION DYNAMICS OF THE ENDANGERED TOP LEVEL CARNIVORE 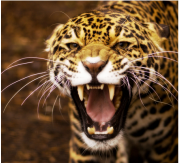 http://bestpaperz.com/ct/8771846-beautiful-women-wallpapers-free.html
Jaguars are the largest of big cats in South America and are the third largest of cats in the world behind the Tiger and the Lion. The name Jaguar is derived from the Native American word yaguar, which means "he who kills with one leap," because of its immense power and agility. Jaguars have been hunted mainly for their incredibly beautiful fur, which caused these top-level carnivores to decline in population size greatly. Although hunting Jaguars are now prohibited today, jaguars have been almost completely eliminated from the United States. These beautiful and powerful beasts are now at risk of being extinct and require protection to insure that their habitat is sustained ("Jaguar," n.d.). 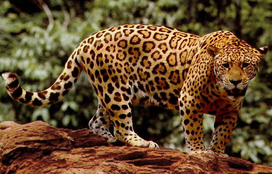 http://wildlifeconservation101.wordpress.com/2012/04/29/el-tigre-jaguar-conservation/
Jaguars have a compact body, a broad head and powerful jaws so strong that they are said to have the most powerful bite amongst all of the world’s big cats (Lutz, n.d.). Most Jaguars have a coat that is yellow and tan, but the colour can vary from reddish brown to black. The spots on the coat are referred to as rosettes because they are shaped like roses. The rosettes of Jaguars are more solid and black on the head and neck and become larger rosette-shaped patterns along the side and back of the body ("Jaguar," n.d.).

The Jaguar and the Leopard are often confused with one another in zoos. Their coloring and markings are so similar that it is difficult for people to distinguish them. However Jaguars have different rosettes, because unlike the leopard, the Jaguar has spots inside of its rosettes (Baskin, Baskin, & Bass, n.d.).
Adult males can reach an overall length of more than 7 feet, and can weigh anywhere from 150 to 200 pounds. Females Jaguars are usually 10 to 20% smaller than males. As mentioned above, its coat colour and markings are very similar to the leopard, however the Jaguar has a larger head, more compact body, and much more powerful paws. Jaguar’s fur is unique to each animal like fingerprints are unique to individual people. Their coat however is perfect for camouflage in the jungle and is extremely vital to their chances of survival (Baskin, Baskin, & Bass, n.d.).